My Fellow Trackers of Santa: the recruiting of elves is going very well. Many of you do not seem to think so. Some of you feel the goal set by Santa is too high. I’m writing today to teach you a little bit about keeping up with the numbers.

Below is a chart that shows how many elves we recruited last year. The only thing to see in this chart is that the numbers for last year are different. In the end, the trend you see in the chart will be very similar to this: 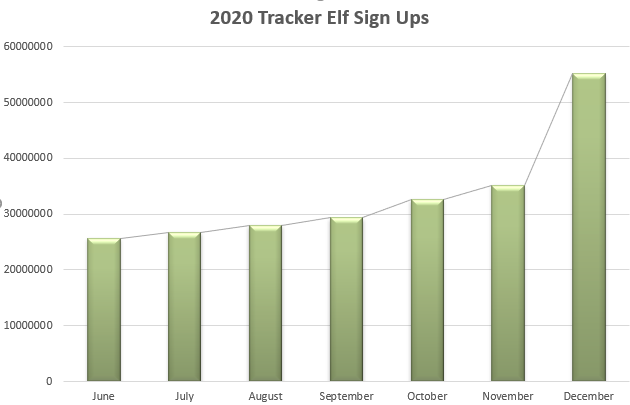 You will note that our growth curve last year was pretty steady until the end of November – then it exploded in the month of December.

Let’s talk a little about that. The numbers recently released has some of you concerned. Some of you are feeling a little discouraged by both the recent results and the big goal that Santa has set.

That is the wrong reaction, elves. You should be happy. In fact, you should be giddy and gleeful and over-the-moon insanely nuts about what has happened so far.

Can you see the difference? On a percentage basis the growth is not that great. But on a real head count basis it’s off the charts – a record breaker!

Santa was a genius to come up with this goal. Without it, we would not be doing as well as we are doing.

Now, over the course of the next several days your elf supervisor in every sector will be sharing the numbers – just as Elf Randi and Elf Tubby have already shared. I am meeting with each one. I will continue to meet with each one.

I am telling them – and I am telling you – don’t worry too much about the numbers. Do the best you can. That is all Santa asks.

As the chart above shows, we are never going to meet the goal with big months before December. It has never happened and it will not happen this year.

I will tell you this: I wouldn’t trade a SINGLE elf we recruit in December for those we get in the months before. Focus on finding believers who want to be elves. Do not waste your time with non-believers, mockers, bullies and those who scorn. Our best elves are recruited between now and Thanksgiving.

Human nature, I suppose. A lot of people will scoff at talking about Christmas in August. Let them scoff. Those same people will be back the week before Christmas begging to become elves.

They won’t be great elves, like you are. They won’t fully understand how to track Santa for Santa, like you do. You are here now. You are learning the way. You will be ready in ways they never can be from coming on board just a few days before Christmas.

Keep your head screwed on straight. We are doing very well. Most sectors are reporting similar numbers. They are nothing to scream about on a percentage basis. But on a real head count basis they are impressive and happy numbers.

If things are not going well, I will send that message personally.

But I am here today to tell you things are going GREAT. I do not anticipate that to change. Trust Santa. Trust the numbers. Trust yourself.

International Director of Santa Trackers at the North Pole Flight Command
Roger is an experienced sleigh pilot, designer and flight engineer who has worked the past 42 years as a flight supervisor in the Tracking Department at the North Pole. Previous to that Roger served as a designer in the Research and Development Department during the crucial years of 1947-1974, an era known for breakout designs in Santa’s sleigh that broke long standing speed records. Roger was the lead designer of Santa’s 1968 sleigh, famous for surviving a brutal blizzard in Bavaria.
https://santatrackers.net/wp-content/uploads/2021/08/080221.jpg 321 845 Elf Roger Star https://santatrackers.net/wp-content/uploads/2022/02/logo5.png Elf Roger Star2021-08-02 00:01:242021-08-01 21:43:24Recruiting Elves is Going Well
5 2 votes
Article Rating
Subscribe
Login
Please login to comment
3 Comments
Oldest
Newest Most Voted
Inline Feedbacks
View all comments