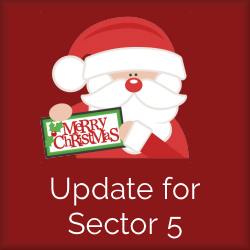 A test flight of Santa’s Sleigh over North America is getting some attention from trackers in Sector 5.

According to North Pole Flight Command the very purpose of the flights there today in the USA and Canada is to see if trackers can catch them. They are testing the map being used in flight command (and seen here at SantaTrackers.net) and asking for trackers to respond by visual confirmation.

Some have reported already they have seen the flight.

Elf Tracy, located in North Carolina in the USA, said in her report that she “saw a streaking light in the sky” this morning and thought she heard sleigh bells.

Another tracker, Elf Snickles he calls himself, who is also in North Carolina, reports seeing Santa’s sleigh in the morning skies too. He describe it more as a “fast moving blob”. He did not report hearing sleigh bells or seeing reindeer.

Today is a big opportunity, trackers! Keep your eyes up to the skies and let us know if you see anything!

Tracking Center Director -- North America at the North Pole Tracking Department
Elf Pinky was recruited from the U.S. Air Force Academy in 1992 and has since served as an instructor in sleigh flight theory at the North Pole Institute of Aviation. She worked very hard to earn her elf credentials, working a second shift first as a tool repair technician in Santa’s workshop and then as an engineer in the Wrapping Department designing wrapping machines. Pinky in recent years was a recruiter and trainer of sleigh test pilots and flies under the call sign Barracuda. Last year she served as a Flight Operations Director and demonstrated outstanding judgment and maturity in her duties supervising more than 400 elves, pilots, reindeer handlers and sleigh freighters.

YOU DID IT!!!
Scroll to top