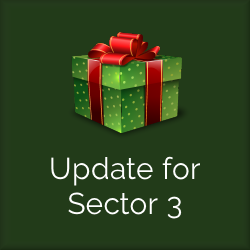 It took a few days and finally we have good news to report. The space for the new Tracking Center HQ for sector 3 has been obtains and engineers are on their way now to Star, Scotland to begin work on the new facility there. Like all regional North Pole tracking centers, I cannot disclose the precise location. The facility will be unmarked and locked to the public.

Plans that I have seen for the building show that it will not need to be remodeled and that with the exception of a live Internet connection it will be ready for us very soon — as soon as the 9th or 10th, about a week or so away. As such, we could be the first regional tracking center the North Pole will have in operation.

That’s very good news for us in Sector 3. North Pole Flight Command tells me that the growth in Santa tracker elves for Europe and Africa is exceptional this year. We will need a little extra time to get organized and prepared for all the new reports we anticipate receiving this year.

I have received some communication from a few new elves who are asking for an in person meeting.

I’m not sure that will be possible. Just so you know I have asked senior management for their thoughts on that and I will let you know what they tell me.

Given all we need to do in the next week or so the elves in Sector 3 should be aware that it might be more than a week before I send another communication to you. But, that being said, I think you can count on me sending regular updates to you from about the 12th or so moving forward.

Looking forward to a great Christmas of tracking Santa with you trackers in the GREAT Sector 3!

Tracking Center Director -- Europe & Africa at the North Pole Tracking Department
Elf Rolf is a native of Austria. As a young man he moved to Russia and was a refugee of that country in 1915 when he found his way to Santa’s employ. Skilled in carpentry, Rolf was given duties in Santa’s workshop where he worked for many years. Charged with building the first airplane Santa ever flew in 1927 — thanks to his wood working skills — Elf Rolf was transferred to the Research and Development Department where he served for many years as a sleigh designer and eventually as a flight test pilot.

Rolf took a departure from that work in the mid-1960s when he pursued a degree in computer science, a pioneering field for the North Pole. He returned in 1968 and for years served in data processing before being transferred to the North Pole Tracking and Flight Command Center as an IT specialist. He was instrumental in helping Santa to set up a network of satellites that have become the backbone of North Pole information systems to this day.
https://santatrackers.net/wp-content/uploads/2020/12/112920.jpg 321 845 Elf Rolf Janssen https://santatrackers.net/wp-content/uploads/2021/03/logo-1.png Elf Rolf Janssen2020-12-02 20:44:212020-12-02 20:44:21Sector 3 HQ Moves to Scotland
5 2 votes
Article Rating
Subscribe
Login
Please login to comment
10 Comments
Oldest
Newest Most Voted
Inline Feedbacks
View all comments

Sector 5 will be exactly like this just different country

The U.S.A always takes a huge part in christmas for some reason.. Anyways Roger that!

This is ridiculous! Why in Rudolph would we need to move?! The land still belongs to Santa, right? Is there going to be a new HQ there or what? Also, is there any way of getting a promotion? I’ve been sending emails about if my work is received and they haven’t replied!

also how do I receive replys?