Elf Megg rocks Flight Command at the North Pole like no other elf can. She is a woman in a place where males dominate. She has to be smart, fast and decisive. And she is. Most of the elves over there at the Flight Command center don’t know quite how to handle her.

Of course, I have a lot in common with Megg. Like her, I’m a journalism major. She covers the news exclusively at North Pole Flight Command. But I had a chance to talk with her and I learned some very interesting things about her. 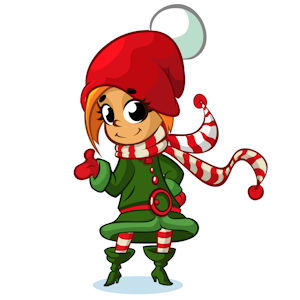 Some think you have to be a rocket scientist to work at Flight Command. Most elves over there ARE rocket scientists. After all, their job is to get Santa safely around the world in one night. You gotta be smart to be like that.

Well, Elf Megg is a rocket scientist, too. You see, she has not only a degree in journalism but also a degree in aeronautics. She is a double major. She knows everything those smarty-pants elves in Flight Command know. They can’t fool her.

So I sat down with Elf Megg to find out a little more about her. Here is how our conversation went:

Q: Megg, you’re a big hero of mine. Is it hard to be one of the only women working at Flight Command?
A: No. They aren’t used to it but that is slowly changing.

Q: When you started that job over there were you scared?
A: Not really. I knew what I wanted to do. I knew what Santa wanted me to do.

Q: Why do you think you got that job over there…you know, instead of it going to a man?
A: I think Santa tried a few men over there in the role of editor. They were always so very technical and Santa felt they never quite explained things in the words of the common person. At least that’s what he told me when I interviewed for the job.

Q: Well, you have had that job for a few years now. Will you stay there? What’s the future for Elf Megg?
A: I work at the pleasure of Santa. Whatever he wants me to do, I’ll do. Right now, I am pretty happy with the job at flight command. I have some big ideas and hopefully this year Santa approves a bigger staff for me to work with.

Q: Oh wow! I’d love to come work for you!
A: And I would love to have you but I think they have other places for you do to things. This Santa Tracker Herald Star job is a peach. I’m kinda jealous.

Q: You’re jealous of me?
A: Well, yeah. You’re smart, you’re fast and you get to write for a HUGE audience. I’d like your job!

Q: Wow. I’m so excited for this job now.
A: You should be. It’s a great opportunity for a smart cookie like you.

If you don’t read what Elf Megg writes at NorthPoleFlightCommand.com you might want to follow her this year. That site is all about Santa’s sleigh, his trip around the world and bedtime advisories for believers. It’s where the news of tracking Santa really begins.

Elf Trixie works in the Public Relations Department at the North Pole as an intern. She is one of the youngest elves on staff in the News Department. She keeps the weekly countdown going at SantaUpdate.com and frequently assists Mrs. Claus in her publishing efforts. Trixie is a Journalism major at Southern North Pole University and has recently accepted additional writing duties as a staff reporter at the Santa Tracker Herald Star. Trixie is single, she has a pet gerbil named Pebbles, and recently adopted her own baby reindeer named Trixie.
https://santatrackers.net/wp-content/uploads/2021/03/031321-1.jpg 321 845 Elf Trixie https://santatrackers.net/wp-content/uploads/2021/03/logo-1.png Elf Trixie2021-03-14 17:04:442021-03-14 17:04:44How Elf Megg Rocks Flight Command
0 0 vote
Article Rating
Subscribe
Login
Please login to comment
0 Comments
Inline Feedbacks
View all comments

Try Out the All New Elf Chat
Scroll to top